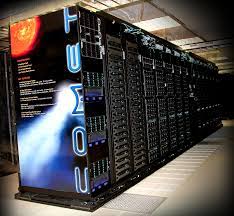 During the month of July Globus transferred over 800 Terabytes of data on Comet, a dedicated NSF funded eXtreme Science and Engineering Discovery Environment (XSEDE) cluster at the San Diego Supercomputer Center (SDSC). While Comet is now officially retired, users will still have access to the Comet filesystems via Globus to facilitate data migration.

Comet was originally deployed for researchers to perform computational research at modest scale and to support science gateways such as the Cosmic2 gateway, a web platform for Cryo-Electron Microscopy data analysis, which is one of many gateways that leverage Globus to transfer data.

In Comet’s six years in service, it has served more than 1,700 unique investigators, and has been instrumental in driving scientific innovation and discovery by connecting researchers to an advanced collection of integrated digital resources and services. Discoveries by scientists at the Laser Interferometer Gravitational Wave Observatory (LIGO), and the IceCube Observatory were also made possible as a result of having access to Comet .