We just crossed the 10,000 mark for registered users and it made me think of the early days of Globus Online. Our first users were Shreyas Cholia, David Skinner, and others from NERSC, a very supportive group that helped us troubleshoot and refine pre-release versions of the file transfer service.

We launched Globus Online at SC10 in New Orleans, signing up almost 300 users in just a couple of days – although I suspect many of them just wanted to get one of our cool t-shirts! It took a little over six months to get to 1,000 users. Since then we've been adding 1,000 users every three months or so and, with the recent beta release of our file sharing service (Globus Online Plus) and Provider plans, we're growing at about 500 users per month. 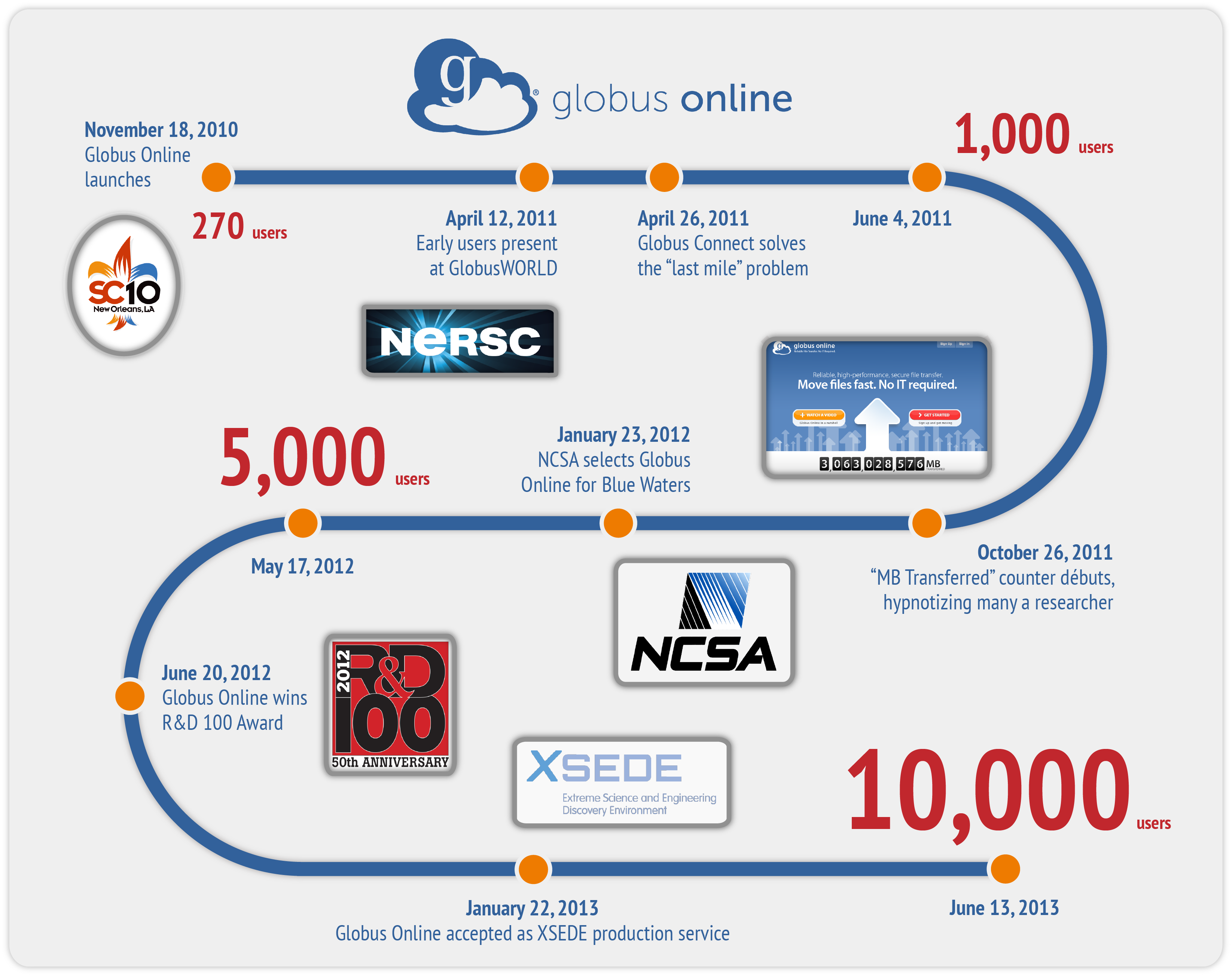 Who are our users, you ask? And where do they come from? Some are HPC system owners, network administrators, and national facility operators like Shreyas and David, but for the most part they are researchers spanning many disciplines at institutions large and small. They are physicists like Katrin Heitmann at Argonne who builds models to simulate the Universe and moved 22TB of data over a few days at rates of up to 5Gb/s, and Steven Gottlieb at Indiana University who realized 50x speed-up in data movement to supercomputing centers as part of his work on classifying subatomic particles. They are biomedical researchers like Stratos Efstathiadis at NYU's Center for Health Informatics, who moves terabytes from next generation sequencers, microscopes, slide scanners, and mass spectrometers to Amazon EC2 for analysis, and Nelson Freimer at UCLA's Semel Institute whose multi-institution collaboration moved 20TB of sequence data as part of their research into behavioral traits of the vervet. These examples are typical of the work Globus Online facilitates on a daily basis for hundreds of researchers as the recommended file transfer at national centers such as NERSC, NCSA, and XSEDE, as well dozens of campus computing centers at institutions such as Indiana University, University of Michigan, and University of California. We're gratified to see this level of adoption and look forward to serving 100,000 researchers! See what our users say about Globus Online and join us.